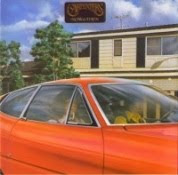 John Bettis: "I doubt that there is anyone alive who is the oldies fan that Richard is: also, the area of the country that he came from was very much more doo wop oriented than out here. I'm from L.A. and the whole doo wop thing was known here, but it wasn't anywhere near as common or as radio heavy as it was back East. Richard actually educated me to a lot of records that I had kind of overlooked - he educated me into an oldies aficionado. You can't be around him and not know two things, old records and cars, those are the two things that you learn with Richard. The funniest thing about that was the chorus: 'every sha la la la, every wo wo wo' was kind of a dummy lyric that we were singing along, expecting at some point we would lift that and put real words in there, and Richard was kind of surprised.
We'd finished the song and he said 'Well, are you going to change this now?'
and I went 'You know what? I don't think so, I think it sounds great this way',
and he said 'Are you kidding?'
I said 'No, this sha la la wo wo wo stuff sounds pretty good',
and I think he had to think about that for a day or two before he really said 'OK'. It's a perfect play in to that era of music, I think."
標籤： ENGLISH, The Carpenters, 名人記, 歌 Songs
Email ThisBlogThis!Share to TwitterShare to FacebookShare to Pinterest